Fair to say that I am not a fan of theme cafes. But the unmistakable line visage of Miffy adorning a cafe in far-off Kamaishi took Veronica and I back to those days some 30 years ago when Dick Bruna’s classics were a favourite in our household. We just had to go in. 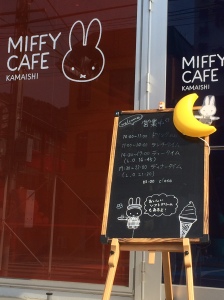 That simple outlined image of a rabbit, often depicted with intense colour, associated with parent’s reading and children’s laughter. What a juxtaposition for Miffy to be in front of us here – a place of death and destruction, an engulfing tsunami etched in survivor’s memories, forever captured on video and seemingly endlessly repeated.

Kamaishi in Iwate Prefecture was severely impacted by the Tohoku earthquake and subsequent tsunami. The physical impact is still being repaired with massive reconstruction efforts on land and in the harbour. And no doubt the psychological impacts remain, maybe never to be fully healed.

So what a delight to pop in to Miffy Cafe late on an April night just before closing. The whole cafe is themed around Miffy, including a menu of Dutch favourites. Being so late, we were lucky enough to be able to chat at some length to staff and to the passionate young cafe manager, Nobuyuki Owada.

Nobuyuki, a Kamaishi local himself, believed his store had a place in lifting the spirits of Kamaishi, where many had witnessed and experienced the tsunami’s devastation on that afternoon of March 11, 2011. And we had to agree with him.

We can only wish he and his staff, and Kamaishi as a community, strength in re-building and moving forward.

Visitors are slowly returning to the hard-hit Iwate Prefecture from within Japan. The Miffy Cafe is also gaining a solid reputation as a destination for local travellers international visitors like us, who until recently were not very common. So put Iwate Prefecture, Kamaishi and Miffy Cafe on your next itinerary.